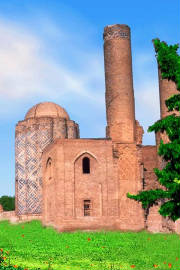 Garabaghlar tomb – belongs to the middle Ages, and situated in the Garabaghlar village in Sharur region. The tomb is the monument. Besides Garabaghlar tomb there are also two minarets and building pieces among them. Both of the minarets are supposed to belong to late XII- early XIII centuries. And the arc connecting these minarets belongs to XIV century. The name of Head of the Elkhani state Hulaki khan’s wife’s name Guti khatun is written in the tombstone.