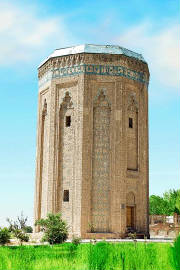 MUMINE KHATUN TOMB – the huge monument of Azerbaijan national architecture, one of the Oriental pearls – Mumine Khatun tomb was built (architect Ajami Nakhchivani son of Abubakr) in 1186 in the western part of Nakhchivan. The founder of the Azerbaijani state of Eldenizler, Shamsaddin Eldeniz decided to built tomb on the grave of his wife Mumine Khatun, and his son Muhammed Jahan Pahlavan finished the construction work in Muharrem (month) in hijri 582 (the beginning of Moslem era from the 16th of June 622, that’s). The local people also call it Atabeyler monument. On the head of the monument, the following words are written: “We are going, and only wind is left. We die, and only the work is kept.”
The total height of the monument was 34 m, and then 8 m out of its surface cover was destroyed. The tomb consists of the surface and underground parts. The tomb part is of ten-pointed shape. According to some other researchers, the tombs of the Head of Atabeyler state- Shamsaddin Eldeniz, his wife Mumine Khatun and his son Muhammed Jahan Pahlavan are all together placed in he monument. The tombstones of those buried there were robbed away. The tomb is of original structure, and is rich in design. Arcs are made from the central column to each of the corners. The same structure of the tomb lately was used in gothic architecture in the West. The outside of the tomb is of ten-pointed shape (each point surrounded with inscriptions), but inside it is round. Inside the dome of the tomb, there four round medallions with the names of the caliphs. The corners of the Mumine Khatun tomb made of burnt brick are of protuberance form, and the surface of the tomb is worked out like hollow.