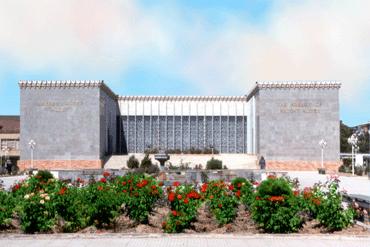 Heydar Aliyev museum – was founded on the basis of the resolution of Supreme Council of Nakhchivan Autonomous Republic dated February 18, 1999. And from this year on May 10 it shows its activity. In the Museum there are available posters dedicated to Heydar Aliyev family, his childhood and youth, relevant documents and materials having relation to period when chairman of Supreme Council of Nakhchivan Republic worked, as well as signed letters, resolutions and orders. The Museum also collected materials devoted to different regions of Azerbaijan where people resided and made their appeals to them. In the museum “Return”, “I am unanimous with the nation”, “Nakhchivan lives and fights” divisions were founded. The library of museum possesses by wide range of journals, albums, and books, reflecting life and activity of Heydar Aliyev.