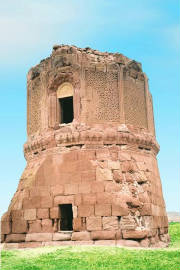 GULUSTAN TOMB – belongs to Middle Ages, near the Gulustan village in Julfa region. The Gulustan tomb built with the impact of Mumine Khatun tomb belongs to tower type tomb group in Azerbaijan. The 12-sided body of the tomb is built of red sand stone, and the original platform (in the shape of cut cornered cub) of planed stone. The surface of the tomb was decorated with hollow geometric ornaments, and decorative arcs. The joint place of the body to seats, and the passage to tower was surrounded with hollow bands of stalactite shape.

GULUSTAN KARVANSARA – this monument is also situated in Gulustan village of Julfa region, on the left bank of Araks River. The relicts of Gulustan Karvansara were discovered as a result of field-researches in 1974, in 1978 the building plan was completely cleared out. During the construction of Baku-Julfa railway (1939-1940), almost half of the Karvansara was destroyed. The researches prove that Gulustan Karvansara is the most beautiful and largest railway caravanserai among others in Azerbaijan.